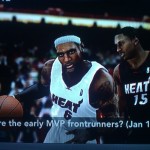 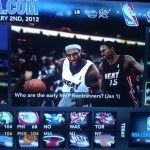 This amused me the other day. I was playing NBA 2K12 on XBOX 360 and this popped up in the NBA.COM news spash section. For those of you who aren’t basketball enthusiasts, the player on the left is Lebron James. He is being guarded by the guy on the right who is Mario Chalmers. The only problem is, they play for the same team, the Miami Heat!

Virtual reality will rule this world one day. Scary isn’t it?